Dear All
I hope you are all well.
Below is the link to today’s service.
We had a lovely service this morning with Clare and Liz taking the singing roles which was excellent.
Last week we received the news that Gail and Mark are moving to Bridge of Allan.  This is very sad news for us as we will miss them very much. However, we do wish them very well in their new home and we thank them both enormously for all they brought to ministry at St Andrew’s. Spiritually, musically and for the love and generosity they have given and shown to us all – we thank you.
Go well, Gail and Mark, and may God bless you both! 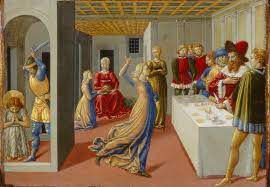 Mark 6: 14-29
Ephesians 1: 3-14
Amos 7:7-15
When I was a rural priest, I was often compared to the vicar of Dibley, I didn’t mind, I actually in a way I took it as a compliment. I thought the programme was a fantastic piece of comedy cleverly put together with a ridiculous cast of characters. Always humorous but never actually offending, I think it supported the church well. Not only did it bring a very humorous side to ministry, it also did a lot to promote women’s ordination which was in its infancy at the time the programme was first released.

The central figure of the show was Dawn French the vicar herself who despite the silliness of her role was always portrayed as a kind, caring, loving and essentially Christian person who kept this community of villagers together in the most charming way.
After the final episode Richard Curtis, the producer, did a review of the whole programme, he said that unlike previous comedies, for example Fawlty Towers where John Clease goes out of his way to be rude and difficult to as many people as possible, albeit very amusing, Dawn French gets herself in such a pickle and such a state because she actually tries to please and be nice to everyone. Richard Curtis felt this was a far more accurate reflection on real life as most of us get ourselves into trouble or awkward situations because we are trying to please everyone rather than because we want to deliberately upset people.

The gospel we heard this morning is an example of this. It centres around the story of Herod, who we remember for being mean and powerful in the nativity story. But here he is caught up in a family situation of jealousy envy and revenge.
Herod had married his brother’s wife Herodias, a matter over which John had chastised him for. Herodias, therefore had a grudge against John and was looking for an opportunity for revenge. And this came at a family party. At this party Herod was charmed by his daughter, in a weak moment, probably fuelled by wine and a sense of good cheer, he offers her anything she wants. So, she goes to ask her mother to seek her advice.  She maliciously seizes the moment and tells her to ask for the head of John the Baptist much to Herod’s dismay.
“The King was deeply grieved.
Yet out of regard for his oaths and for the guests
he did not want to refuse her.”    Mark 6:26
Against his better judgement he came under pressure from those around him to take the decision he did – to grant his daughter’s request.  He ended up pleasing others when he knew deep down inside he should be making a different decision.

In many ways this is an extraordinary story and its actually intriguing why this mini soap story appears in Mark’s gospel at all. Generations of Biblical scholars have questioned it. It’s odd because the account of Jesus ministry in Galilee  is really getting under way at this point in the gospel, and then suddenly we are interrupted by this account of John the Baptist. It doesn’t happen in the other gospels, and Mark’s gospel is known for its brevity and for getting on with the main story. So, we may ask what is the significance of this here?

Well, there are clearly connections with Jesus’ own trial before Pilot where Pilot too falls under the pressure of the crowds and agrees to hand Jesus over to be crucified again, with a feeling of unease and uncertainty.

More significantly the John the Baptist story prepares us for the ultimate rejection of Jesus, a forerunner warning of what is to come.
Ultimately it identifies where hope is to be found. Jesus’ suffering on the cross invites us to share his story with our own suffering. But equally we are invited to share the hope that the resurrection brings us.

And this story does end on a note of hope. It doesn’t finish simply at the exhibition of John the Baptist’s head on a platter at the party, but with his disciples taking his body and laying it in a tomb. John being handled by those who love him, preparing him for eternal rest.

On the face of it this is a story of family tensions, wilful daughters and peer pressure. But at a deeper level Mark is pointing us to something more – to Jesus’ unfair trial, and from Jesus’ unfair trial to the cross.
From the cross to the resurrection. To glory and to hope!

Sent from my iPad