Dear All
I hope you are well.
This morning, although few, we had a lovely service.
Penny was on the piano with Liz singing – some of my favourite hymns!  It was wonderful!
The link to the service is below.
Yesterday I had a message from Gail and Mark to say that their move had gone smoothly, and they were now settling into their new flat at Bridge of Allan.
They also wanted to say a big thank you to you all for the cards, warm wishes and the flowers which were blooming, bringing cheer to the flat.
Have a good week,
A x 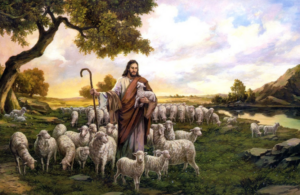 Today’s gospel is based on practical Christianity. It illustrates that Christianity demands not just theory but practise as well. The apostles returning from their mission report. “All that they had done and taught”  Mark 6:30
Here Jesus teaches the crowds and heals their sick friends and relatives. In the verses omitted from today’s reading he also feeds the five thousand. Another very practical example of his compassion for the crowds whom he describes as the sheep without a shepherd.

The image of Jesus as a Good Shepherd which occurs throughout the NT continues, an OT theme depicting God in these terms. Just as Jesus entrusts his apostles to take up the role as shepherd of the people, so in the OT the leaders of Israel are described as shepherds and both Moses and David were shepherds.

On Friday Richard and I were walking up beyond the Bracklinn Falls, just north of Callander.  Our path took us through a busy sheep farm.  Before walking through we watched the shepherd heard his flock through the farmyard out into the hills the other side. It was a joy to see him working his flock, making sure they were all accounted for and to see how the sheep responded to him.

Shepherds need to be on the ball, a laidback shepherd is no use to his sheep. It’s a proactive role.  Shepherds need to be with their sheep and know them, so they can protect them from harm and lead them in the right direction.
Biblical images of shepherds leading their flock contrast with the modern image of shepherds walking behind them often with a border collie. But in biblical times a shepherd needed to go into dangerous situations. They were often faced with craggy outcrops and vicious wolves. Today’s shepherds sleep in their own beds. Biblical shepherds slept with their flocks, ready to act if danger threatened.

Jesus, God with us, God incarnate lived with his flock. He did not preach the kingdom of God during the day and retreat to a heavenly place at night. He did not set up a permanent pulpit in temple or synagogue or restrict his teaching ministry to the Sabbath.  But combined his teaching with practical demonstration of it – out in the everyday world. Like a good shepherd he was prepared to risk his life for his sheep. And in the Eucharist especially we recall how he scarified himself and brought salvation to us. Jesus practised what he preached, and he sent his followers to do likewise.

A few years ago, I was privileged to be invited to a chaplaincy information day at Blandford Camp.  During the day we were given various presentations on the role of the chaplain in the context of the army. Essentially it is very much a pastoral role supporting the soldiers and their families in all matters spiritual and other. But their ministry is not just simply an armchair role of kindness and encouragement or leading worship in the sanitised surroundings of a garrison church.  These padres like the shepherds of the NT are expected to walk alongside their men and women in the front line of battle. They are completely unarmed as they work with them, praying for them, supporting them in many situations and in some cases putting themselves at risk.

Like the first disciples we are sent to continue Jesus’ mission in the world. The very word pastoral comes from the Latin word for a shepherd, and it is often used to distinguish practical Christian ministry. But practical action shouldn’t be separated from knowledge of the scriptures, or our worship and prayer as one informs the other.
We need to remember that the good shepherd himself combined teaching and doing, that was the example Jesus sets us.

We are called to take our faith into the world, and we can do that in ways that are best suited to own gifts and situations.  We are not all in a position to carry out ambitious community projects, or like the padres step into a theatre of war. But we can all pray for each other and pray for God’s people. Encourage and support each other.
Whatever form it takes practical support of others, when carried out in the name of Jesus Christ, is effective ministry and a reflection of Christ’s ministry in the gospels.