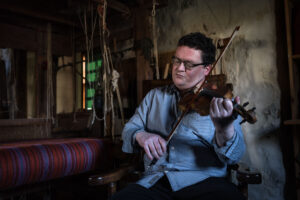 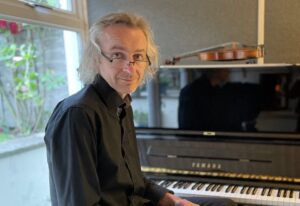 Leading Scots Fiddle exponent Alastair Savage accompanied by pianist Laurence Wilson will be giving 2 performances in St Andrews Church Milngavie on Thursday 19th of August. The first performance will be at 6pm & the second at 8pm prior to a concert at this year’s Edinburgh Festival the following night. Described by the Herald as  ‘a must for aficionados’ and ‘a primer for anyone with a notional interest in Scottish traditional music’, Alastair is a prize-winning Scottish fiddle player and has been a member of the BBC Scottish Symphony Orchestra for the past 24 years and is one of the musicians shortlisted for this year’s Scottish New Music Awards.
Alastair said ” I am a former pupil of the ‘Music School of Douglas Academy’ and I feel that Milngavie is like a second home & actually it was home for 3 years of my life when as a teenager I boarded close by during my attendance there. With St Andrews Church now having a lovely Bosendorfer grand piano and a wonderful acoustic I am very excited to be giving these 2 concerts in this venue.
For the 2 performances which will last just over an hour Alastair will be joined by the celebrated Orcadian pianist Laurence Wilson. Laurence is a native of the island’s rich traditional music heritage and has most notably worked alongside the legendary fiddle player Jennifer Wrigley . Laurence first performed with Alastair at the St Magnus Festival in Orkney in 2019 however these 2 concerts in Milngavie will be the duo’s first ever performances on mainland Scotland.
Further info available from WWW.alastairsavage.co.uk
At the time of going to press ticket availability is not known as the numbers will be limited due to covid restrictions in place at the time.
Tickets will only be available on the night at the door 10 pound per adult with child free accompanied by parent.