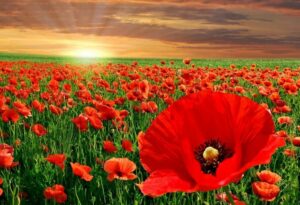 Today was Remembrance Sunday.
Pamela had done a wonderful display of poppies reminding us of the fallen.

Further news from the diocese and church can be found on the St Andrews website. Click on the link: https://standrewsmilngavie.church.scot/

Last week I read an interesting book review in the paper. It was about a book called “The Battle of London” by Anne de Courcey – a detailed history of London during the war.  It’s essentially the story of London from the phoney war to the blitz and through to the V1 and V2 rockets. It was beautifully illustrated.  One picture particularly caught my eye – it’s a picture is of about a dozen or so of women dressed in green overalls in a large suburban back garden all doing what looks like star jumps while they take a break from manufacturing RAF devices for a physical training session in Herne Hill in 1944.

What I think the book really highlights is that war involves everyone. Whether it was waiting anxiously on the home front for news of a loved one, facing the horror of the blitz, coping with rationing and privation – everyone was effected. This is one reason why Remembrance Sunday is so significant.

This annual act of remembrance gathers us as a nation because, as well as the sacrifices of the past, we remember that men and women of today’s armed services continue to make extraordinary sacrifices – sometimes the ultimate sacrifice – in the cause of peace and for the preservation of freedom and justice.

In recent years, UK forces have regularly been deployed in more than 80 countries around the world, sometimes at a moment’s notice.

There are many war memorials in towns and villages up and down the country where today people will gather but also many will gather for this act of remembrance and thanksgiving in churches.

One of the reasons for this is the stories that surround war: the countless human experiences of the bravery, sacrifice and anguish of war and violence. Today we gather all those stories into churches such as this and place them in the context of the great Christian story of the violent suffering of Jesus Christ’s crucifixion and the hope of the resurrection.

We can fit our human stories of the sacrifice and pain of war into the Christian story is because Christianity never glosses over the human suffering and loss that is the inevitable outcome of war.

The Bible never fast forwards through the crucifixion to arrive swiftly and triumphantly at a cosy resurrection. The Christian story recognises the reality of human violence and our grief that, in this fallen world, it is sometimes necessary to fight and die for freedom and justice in defence of the vulnerable. Yet the Christian faith also teaches us that death and sacrifice – the cruelty that crucified Jesus Christ and his sacrifice for us – that death and sacrifice does not have the last word. It doesn’t end there.

Our hope lies in something more – another kingdom, a new life. In the resurrection of Christ lies our hope that the death of our servicemen and women and the grief that follows are not the end. This isn’t wishful thinking – it’s been the testimony of the Church for 2000 years and the witness of this church for over 100 years. It’s the hope that has been carried into war in the prayers and hymns of soldiers, sailors and air personnel for generations. The Christian faith is real enough that it can be proclaimed and prayed even on the battlefield – especially on the battlefield, where we are most in need of God’s mercy.

The men and women whom we remember today, the millions killed in armed conflict, from the two world wars and the many conflicts since, they all gave the gift of their lives in the cause of freedom and peace. Each one of those lives is a unique and irreplaceable gift, so it is absolutely incumbent upon us today to be peacemakers and thereby ensure that they did not give their lives in vain.

It’s also incumbent upon us as a nation never, ever to put our armed service men and women into harm’s when they might be asked to lay down the gift of their lives for anything but the most pressing and desperate of reasons.