Dear All
We were a modest turnout out this morning to celebrate the second Sunday of Easter. However, the church looked lovely, and everyone was in good heart.  We all welcomed Hugh to play for us in Gordon’s absence. Coffee was especially cheerful as we all wished Penny a very special Happy Birthday and enjoyed a slice of her yummy fruit cake.
This afternoon we look forward to the concert. 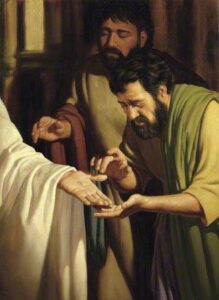 Today is commonly referred to as “Low” Sunday. The joy and celebration of Easter is over, today is seen as just another ordinary, run-of-the-mill Sunday, often with a low turnout. But anyone who looks at today in that light is mistaken. Liturgically speaking today is not the First Sunday after Easter.   It is the Second Sunday of Easter. Easter is not an end; it is a beginning, it is the beginning of new life, a re-creation.

The Church devotes seven Sundays to exploring the Easter message and its implications for us its Easter people.  Last week we celebrated the victory of life over death. In the remainder of the Easter season, we examine what that victory means for the disciples and for us.

Today’s Gospel events begin on the Day of the Resurrection. We join the disciples late that evening and find them frightened hiding behind closed doors.  Jesus then appears to them in that room and only after he bestowed his peace upon them did, they recognize him. He breathed his Holy Spirit upon them and sent them out as God had sent him.   But eight days later the disciples were back behind closed doors. So, Jesus came to them again and gave them his peace.

In every post-resurrection appearance, Jesus appeared to the disciples wherever they were. To Mary Magdalene sobbing in the garden, to the disciples cowering behind closed doors at what was probably the lowest point in their lives, crushed by despair, consumed by grief, and overwhelmed by doubt. Jesus sought them out. Even though they continually failed to recognize him, even though they continued to hide and probably didn’t even deserve a second visit, Jesus came to them again.

And so, he comes to us, as he comes to the people of Ukraine. When misery overwhelms hope, when faith dissolves to doubt, when fear replaces courage, when loneliness devours us, God finds us and comes to us wherever we are. We may not recognize him at first, but he comes.

God comes to us over and over again. It may be in the kind deed of a stranger, in words of encouragement from a colleague, in the embrace of a friend, or even in difficult words of tough love from our family. God comes to us. He comes with his love and with his forgiveness.

Jesus also forgave the disciples. He tried many times during his ministry to explain to them the fate that awaited him. He explained but they never really got it. In the end, they deserted and denied him, and even after hearing about the resurrection, they hid behind closed doors, presumably for fear of the Jews. When Jesus found them behind those doors that first evening and again, the following week – afraid, but perhaps also embarrassed by their many failures, too confused to believe or reluctant even to hope – when he found them hiding, he didn’t argue with them, he didn’t criticise them. He forgave them.

His first words to the disciples on both occasions were “Peace be with you.” This was neither the peace of a casual greeting nor a wish.  It was a healing gift, a restoration of their relationship with God.   It was new life, Easter life.

We’re just as human as the disciples and just as likely to hide behind closed doors. We hide because of fear, possibly because of shame or embarrassment. There are times when we’re wounded, sorrowful, or afraid, or even worse, have caused another to be so. Maybe our faith wavers frequently or even disappears entirely at times. Each of us has our own special set of doors behind which we hide. But no matter how often we slip back behind those doors, God offers us peace, love, and mercy.  God offers us the restoration of right relationships, new life, Easter life.   God provides a community to enfold us and food to nourish us. God forgives us.

Jesus transformed the disciples. After forgiving them, Jesus breathed his spirit into the disciples. He breathed his spirit into them and sent them out.   It may have taken them several tries, but they emerged. Emerged from fear, failure, and doubt, from behind closed doors and into the world.   It was not an end, but a beginning. They were no longer disciples but apostles.  They were no longer followers but active participants in Jesus’ mission.

Through baptism and the sacrament, we also have received his Holy Spirit and are sent out from behind our individual doors. And so, we leave behind our fear, doubt, and embarrassment and begin a new life. A life filled with the hope of the resurrection, an Easter life. As God transformed the disciples, he also transforms us.

“We are his Easter people and alleluia is our song.”