3rd Sunday of Easter St Andrew’s Milngavie 2022
Dear All
Today we welcomed Fraser as our Preacher.  We all very much appreciated his words of insight and wisdom as he reflected on the scriptures of the day.
Gordon put us through our paces as he introduced two new hymns! We had a practise at the beginning of the service for one of them which proved quite a challenge but actually turned out to be quite good and rather a nice hymn.  I have suggested to Gordon that we sing it again soon before we all forget it!

Notices for this week:
Tuesday 10am Prayer Group in the Garden Room.
Thursday 10am   Said Eucharist followed by coffee in Friendship House, 4pm  Vestry – Garden Room
Sunday 8th May  3pm  –  Milngavie Choir Spring Concert  –  St Joseph’s Church – please do support, tickets available on doorSaturday 14th May
Bluebell Walk – Meet 11am Balmaha. Walk on Inchcailloch. Sail from boatyard at Balmaha c 11.am. Picnic on island. Walk 1 mile easy or 2 miles including climb to summit. Toilet on island. Return whenever you want. Tea rooms etc in Balmaha and Drymen.  Boat fare £7.50 and day ticket in car-park £3.20. Try to car share. No booking required but try to inform Jane or Tim by next Sunday May 7th if you intend to come. 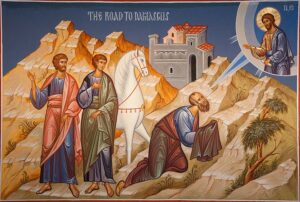 Sentence: Lord Jesus, open the scriptures to us, make our hearts burn within us while you speak.  Based on Luke 24:32

This opening sentence is presented as a prayer for us to use.  In its original form it comes from Luke’s account of two dejected disciples walking on the road to Emmaus, too dejected to look up when a stranger joined them and started to speak to them.   They explained why they were so dejected, recounting the arrest, torture and death of their friend Jesus.   He challenged them to think of how these events were foretold by the prophets, and they listened. At a meal together they recognized him, but he was only briefly there with them.  Afterwards they reflected that they had been spellbound as He had explained  the scriptures to them and said that as He had done so their hearts burned within them.

Those two disciples had had the benefit of being brought up in the traditions of Jewish culture and the reading and proclamation of those same scriptures.

Another example of the explanation of the words of prophecy having a profound effect is in Acts chapter 8, where Philip was prompted by the spirit to find an Ethiopian eunuch, a high official in his own land, resting by the wayside and reading aloud from the prophecy of Isaiah.  ‘How can I understand if nobody explains it to me?’  So Philip explained, and the man was baptized before going on his way back to his own land.   The Scripture and its explanation must have set his heart on fire as well, because we now have clear archaeological evidence that there were people in Ethiopia following Jewish worship, and places where they met have been discovered with Jewish star of Davide carvings and Christian symbols alongside.    The origins of the Coptic church?

{Cosider the context for  the reading in Revelation today.  The Lamb that was slain alone was worthy to open the scroll.   The four creatures representing the Gospel writers were there.}

What about Paul then?  He was very well versed in the Scriptures, and would have read and taught from the prophecies as he was ‘a Pharisee of the Pharisees’ on his own admission.  Knowing the prophecies, he must often have read the passages in Isaiah which spoke of the Messiah, and must have been looking to the fulfilment of their message, but was persuaded that Jesus was not the promised Messiah by the reactions of the other readers in his day.   Engaged in persecution of the followers of Jesus, he must have been troubled by all the signs that Jesus  was after all the Son of God long awaited.  We can only guess what internal turmoil built up to the vision on the road to Damascus and his blindness and physical collapse. After his rescue by Ananias and recovery, he was baptized.   His subsequent preaching and successful missionary activity must indicate how thereafter as he explained the scriptures he must have been on fire in the Spirit.  His heart and the hearts of those he converted must indeed have been on fire.  His missionary efforts and those of the other Christian leaders in the Acts of the Apostles show how they obeyed Jesus command to those who came after him to ‘feed my sheep’.   This was both in preaching to the communities in which they lived, evangelizing in new areas, but also in supporting each other, appointing deacons to give support to those in need etc.  Their basic message is beautifully summarized in Colossians chapter 1 :

‘ [Christ] is the image of the invisible God……..In him everything in heaven and on earth was created.  ….He is the head of  the body, the church… the first to return from the dead……in him the complete being of God…..came to dwell.  Through him God chose to reconcile the whole universe to himself,  making peace by the shedding of his blood on the cross.’  (NEB translation of selected  verses.)

We proclaim our beliefs in the creeds and the Easter message and recounting of what we believe is also summarized in the Liturgy of the Sacrament  variant which we use at this season.

Where does this leave us?   In a sense we may be rather like Paul, knowing the scriptures,  recognizing passages in the prophecies from many Christmases and Easters in our lives, and through familiarity have a rather entrenched view.  The Ethiopian eunuch was puzzling over Isaiah’s writing, seeing it without prejudice, and then enlightened by Philip’s explanation.   When feeling deeply despondent the two disciples suddenly had their lives enlightened and empowered by Jesus’ revelation of how he fulfilled their expectations from their earlier studies and hopes?  Many in today’s society would have heard the prophecies and the stories in the Gospels and set them aside as not for them.

Perhaps many, ourselves included, just take the scriptural words as part of our culture.

Having read the scriptures over and again for a long number of years, using different translations and many commentaries, I find that changing the setting for reading, considering what scholars have to offer,  reflecting on passages that at different times have really struck home; all have deepened faith.

Recently I read an account by a lay reader in an English diocese, who had recently retired and decided to try to learn New Testament  Greek.   She found that having to really think about each word or phrase as she grappled with the challenge of the unfamiliar language, her understanding and response deepened.   That would be too much of a challenge for almost all of us, but it reinforces a deep truth, that to be really set of fire by the Scriptures, we are always on a journey, and that journey is profoundly worth exploring.

I was reminded recently of T.S.Eliot’s words in his poem Little Gidding.

‘the end of all our exploring/ Will be to arrive where we started/ And know the place for the first time.