Today we gathered to celebrate the fourth Sunday after Trinity.  We were a select crowd with most of the congregation seemingly away on holiday!
Harry very kindly played for us in Gordon’s absence.

Notices for this week:
Tuesday 10am Prayer Group in the Garden Room.
Thursday 10am Said Eucharist followed by coffee in Friendship House 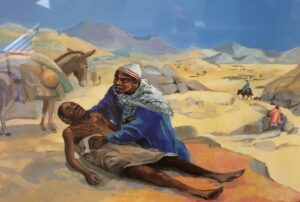 I think we would all agree that the tale of the Good Samaritan is one of the best-known stories of the bible. The fact is it contains a clear simple message: Love your neighbour – the founding principal of the Christian faith. Even in the secular world the word “Good Samaritan” is familiar being an expression synonymous with helping those in need, often in unusual ways and involving sacrificial kindness.

The trouble with these very well-known pieces of scripture is they can become over familiar to us and therefore unremarkable. So, it is good idea to dig a bit deeper and try to look at the text from a different angle.

The parable of the Good Samaritan is perhaps more complex than it might seem at a first or a hundredth time. We must remember that the story is actually told in response to the lawyer question “What must I do to inherit eternal life?”
“What do I have to do to go to heaven?” is the way we may ask it. It’s a good question, if a simple one. Jesus answers this question by typically asking another question: “what is written in the law?”. The lawyer replies by giving the classic correct answer “You shall love the Lord with all your heart, with all your soul and with all your strength and your neighbour as yourself”

But the lawyer now perhaps feels a bit foolish. He has after all, with great ceremony, stood up, asked an obvious question and got an obvious answer. And so, the next thing we learn is that  “he wanted to justify himself”. So, he asks a supplementary question to avoid losing his credibility. “And who is my neighbour?” It is in this context that Jesus tells us the famous story. And what a wonderful story this is!

Told in the classic structure of the “story of three”.  Everyone listening would know that the first two characters would get it wrong, and the third would get it right.  The dangerous journey between Jerusalem and Jericho was well-known, so, the plight of the man would arouse sympathy. The indifference of the priest and Levite would horrify the lawyer and raise knowing looks among the crowd.

As the story reaches its conclusion the lawyer would have assumed that the one who would get it right would be a Pharisee or similar.  Equally the crowd would probably have thought so too. The shock of what comes next can’t be over emphasized.   The Samaritans were the sworn enemies of the Jews.   The very idea that a Samaritan would be the one who Jesus would put up as a model of integrity, as an example of love for others was unthinkable!

But we are called to love our enemies and it’s a tough call and its tough love. So tough we may well think that it is entirely beyond anything that we can find in ourselves. This isn’t the only time in the gospels that Jesus asks the impossible of us.  We are reminded of the passage in Matthew when in a similar vein The Rich Young Man also asks Jesus what he must do to inherit eternal life.  And Jesus replies equally in a similar vein…
“Love you neighbour as yourself” But then adds “if you wish to be perfect go and sell your possessions and give the money to the poor” And the Rich Man walks away because he can’t do it.

Two Sundays ago, we heard in the gospel of the man who wanted to bury his father and the man who wanted to say goodbye to his family before joining Jesus. But Jesus wasn’t having it -they were to follow him now. Sometimes in the gospel Christ asks exacting standards of us. The lawyer wanted to know how to get to heaven. Jesus responds by telling him a story that confirms his worst fears. The standard is high if not impossible.

The reaction of the assembled crowd would surely be same. And that is the point. We need a saviour, we need a Good Samaritan, we need someone who will take us in his heart, rescue us and see that we are saved.

Jesus is our Good Samaritan. Of course, he gives us a great blue print for our behaviour in this life. And of course, we do our best to live by this and the principals he sets. But ultimately our salvation is in the hands of God.

The message is clear: Trusting in our own actions may get us closer to the kingdom of God. But it is trusting in Jesus is which really brings us to Eternal life.
Amen