I hope you are all well.
Below is the sermon for today. The service itself is being uploaded into a You Tube as I write and will be forwarded as soon as it is ready.

Many thanks to Liz today who had to step in at the last minute to cover for Laura.  Well done Liz!

Love to you all
A x 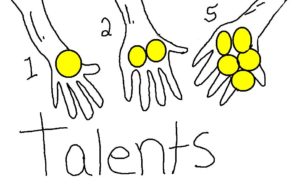 This week after months of waiting with anticipation we have had the most welcome news that a vaccine has been proved to be effective in the fight of corona Virus. Details have yet to be finalised but we at last it looks like there may be an end to this nightmare in sight – light at the end of a dark tunnel.

In the churches year we are now in the Kingdom season – the few weeks which fall between the end of Trinity – ordinary time – and the beginning of Advent.

The readings during this time also use a similar language of waiting, anticipation and light in the darkness as we look towards Advent and the return of our Lord.   They are often uneasy passages which contain warnings, judgements and description of end times.

In the gospels Jesus instructs his disciples to endure through these difficult times and to live in anticipation of the Lord’s return. As a result, the first Christians thought that Christ’s return was imminent.

If you are single, why bother to marry?
If you are married, stay married.
If you are a slave, stay a slave, because soon Christ will return.

But as time went by much doubt about Christ’s return began to imerge. And now after 2000+ years of history it is certainly not top on our lists of major concerns. Will Christ really pitch up here on earth gather up his faithful?

But the gospels all tell us so and Paul certainly thought so.

In his letter to the Thessalonians Paul, showing familiarity with some of the gospel passages, dealing with the need  to be ready for the coming of the Lord,  stresses that Christ might return at any moment, and his people must be prepared for this.  No one is sure when and so there is a need to be watchful.

The day of the lord will come like a thief in the night when people are unprepared for it.

At that time in Thessalonica there was a concern that those still living when the lord returned would not share in the resurrection. Paul reassures them on this point.  Whether they are alive or dead, ie asleep or awake as he puts it, at the second coming they will be taken up to be with the lord and live with Christ.

In the OT reading the prophet Zephaniah also talks about the Day of the Lord but in much more gloomy terms. He is warning the people of Judah that destruction awaits them as their religious life has reached an all-time low.  It will be a time of distress and anguish as the lord brings punishment to his disobedient people.  Nothing can stand in the way of this judgement.  Wealth and power are useless.  Only righteousness and humility on the part of Judah offer any hope of this dreadful judgement not being inflicted.

In the parable of the talents the theme of the return of the Lord is also explored but in a different way.  Here attention focuses on what the servants do during their master’s absence when he entrusts them with money.

The main point being made that the master will return without warning to see what has happened in his absence. He wants to see that the time has been well spent. The returning master is furious with the servant who buried his talent and refused to use it. The point is God’s gifts increase through being used.  The parable tells of three servants, two of who use their money and increased its value and the third who buries it in the ground.  It was not used and therefore did not grow.

So this morning, rather like a government covid warning in these days before Advent, we are advised by our scriptures to keep alert, be watchful for the lord will come like a thief in the night at an unexpected hour.

Like the early Christians do we endure our earthly adversities in the knowledge that there is a greater existence to come? Or do we listen to the gospel and to use our time wisely while we wait?

Perhaps the answer is to do both.