Dear All
Today we celebrated the Second Sunday of Epiphany. It was a lovely bright sunny morning with a good turnout to do justice to Gordon’s chosen hymns and lively playing.

Notices for this week:
Tuesday 10am Prayer Group in the Garden Room.
Wednesday 7.30 Book Group on Zoom
Thursday Holy Communion 10am 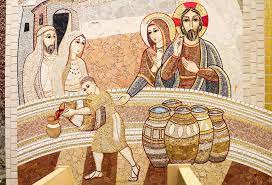 The wedding at Cana is one of the best-known passages of the bible. I suspect because the story’s focus is a wedding and more significantly wine and lots of it! For many it may be one of only a handful of stories that known.

Elsewhere, outside the gospels, we have the reading from the book of Revelation where heaven itself is described as a wedding feast of the Lamb and the ultimate union of Christ and his Church.

In ALL these cases the wedding is a symbol for the kingdom of God.  And the wedding at Cana must be understood in this same symbolic way.

This miracle was the first of what John calls Jesus’ signs.   And the chief focus of this “sign” as in all John’s miracle stories is the revelation of Jesus himself as Christ – the Messiah. It is for that reason the reading is set in the season of Epiphany – the season of the revelation Christ to the world.

At the feast of the Epiphany Christ was revealed by the witness of the wise men.  Last Sunday it was through his baptism with the voice of God saying “This is my Son” Today it’s through Jesus miraculous powers to change water into wine at a wedding at Cana.

Weddings in Jesus’ day were often very big occasions lasting sometimes up to a week! Banquets could be prepared for many guests, often the whole town was invited and there would be large numbers gathered. So, to run out of wine was a social disaster and a disgrace. But Jesus steps in and shows compassion. A compassion that we will see and is typical of him throughout his entire ministry. Time and again Jesus will respond to people’s needs, often in the most unexpected ways. And here he transforms the water into wine, he saves the party – the celebrations could go on. And not only was there more wine but it was even better wine!

But none of this would have happened if Mary hadn’t have said to the servants “do whatever Jesus tells you to do” Mary’s presence in this story is quite significant. First, we notice her relationship with Jesus. He refers to her as “woman” which was not a disrespectful title in those days, but it doesn’t sound very warm. Jesus seems to be distancing himself from his mother. So rather than addressing her as mother, he calls her “woman.” He subtly indicates that the nature of their relationship is changing.   Until now, she had been Jesus’ mother, but now she had to begin to learn how to be a disciple as well. This process would be painful for her. She would feel rejected at times and eventually she would witness his crucifixion.

In John’s gospel we only meet Mary twice. On this occasion and at the foot of the cross which relates to Jesus’ strange remark in v4 “My time hasn’t come yet” Words which point, even at the beginning of Jesus’ ministry to the cross and to the resurrection.

But stories like this one signpost us to that moment. The wedding is a foretaste of the great heavenly feast in store for God’s people as described in the book of Revelation. In this first miracle in John’s gospel Jesus reveals his glory to us by his miraculous act of turning water into wine and so saving the day from social disaster. He also transforms our relationships by the depths and divinity of his character showed through the relationship with his mother.

Furthermore, the water jars used for Jewish purification rites are a sign that God is doing a new thing from within the old Jewish system bringing purification to Israel and the whole world in a new way.

But most significantly he points us to the mystery of a greater truth, to the resurrection, to the fact that he is the saviour of the world.
Amen